Kolli Hills (Tamil: கொல்லி மலை) is a small mountain range located in central Tamil Nadu in India. The mountains are about 1000 to 1300 m ASL and cover an area of approximately 280 km². The Kolli Hills has 72 hair pen bends to reach the top of the hills. The Kolli Hills are part of the Eastern Ghats, which is a mountain range that runs mostly parallel to the east coast of South India. The mountains are relatively untouched by commercial tourism and still retain their natural beauty. They were sometimes known as "Kolli Malai", the "Mountains of Death". Kolli Hills is an unspoilt , unknown Hill station. Located at -Latitude: 10°12' - 11°7'N, Longitude: 76° - 77°56'E. The Hills is situated in the Eastern Namakkal, part of the Trichy & Namakkal Forest Division in the state of Tamil Nadu. Its a pretty hill station with a pleasant cool climate. Kolli hills temperature never rises above 30ºC or falls below 13ºC. This is one hill station where one does not feel the biting cold of winter. With such a salubrious climate, kolli hills can be visited round the year, clouds are seen round the year- its another amazing scene in south India. 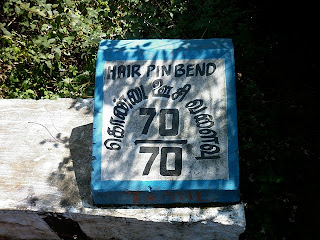 History: The Kolli Hills are featured in several works of classical Tamil literature such as Silappathigaram, Manimekalai, Purananuru andAinkurnuru. The region was ruled by Valvil Ori around 200 A.D., who is praised as one of the seven great philanthropists of ancient Tamil Nadu. His valor and marksmanship are sung by several poets, and his exploits are a popular part of folklore. Ori is said to have killed a lion, bear, deer and a boar with a single arrow.

The hills are said to be guarded by Kollipavai, the local deity. According to legend, the sages chose Kolli hills when they were looking for a peaceful place to do their penance. However, the demons invaded the hills to disrupt the penance when the sages began their rituals. The sages prayed to Kollipavai, who according to the myth, chased away the demons with her enchanting smile. The Kollipavai is still worshiped by the people here and her smile is revered. The mountains have several mythological legends associated with them, and often come across as an eerie place in contemporary tales due to the unexplored and less traveled terrain.
The Kollihills is a sub taluk and forms a part of Namakkal district. Semmedu is the headquarters for the Kolli hills and Semmedu is connected by road to Namakkal and Salem. There is also one Horse track used by the Britishers connecting Semmedu to Chinna Pallamparai at plains through Vasalur Nadu.

Farming & Vegetation: Apart from its historical significance, the mountains are covered with evergreen forests, but increasing areas of forests have been cleared for farming. Important farm products of the mountain ranges include coffee, tea, jackfruit, pineapple, black pepper and other spices. Rice and other minor millets form the staple food of the tribal people who inhabit these mountains. The jackfruit grown on these mountains is well known for its taste and fragrance and is often soaked in wild honey that is also harvested from these mountains. The mountains are covered by lush green vegetation in the spring and monsoon, and are streaked with streams which add to the natural beauty. There are three reserved forests that are controlled by the Government of Tamil Nadu, namely Ariyur Solai, Kundur Nadu, Pulianjolai It is not correct to regard the name kolli hills as being due to the incidence of deadly diseases such as malaria!It is because early literature records the existence of an image called kollippavai on top of these hills.This image was believed to represent the spirit of a maiden who lured wayfarers by her beauty and then killed them.

Religious Significance: The mountain is a site of pilgrimage, because of the Arapaleeswarar temple, which is believed to have a secret path to the Shiva temple in Rasipuram. This Shiva temple is said to have been built by Valvil Ori in the 1st or 2nd century when he ruled this area. "Arappaleeswara sathakam" is the poem which praises the Lord Arappaleeswarar. It is believed that this temple exists during the Sangam period itself.

Some of the famous spots are

What do u do in Kolli Hills 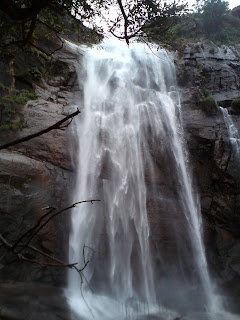 The waterfalls is truly like the Ganges river from the sky. All those who have visited this spot shall not deny this fact. The river that flows here is the Panchanathi and it flows down from a height of  300feet to form the Aakash ganga waterfalls. One real exciting fact is that we can take bath in this waterfalls that falls from this supreme height.

To reach this waterfalls, we have to descend (climb down) nearly 1100 steps. But the steps and the route are well laid and it is completely maintained by the forest officials. The route goes amidst the thick forest and so the route is shady and chill throughout. One important thing to
remember is that to reach the waterfalls, the tourists must be in the spot by 4pm as after that the officials strictly restrict anyone getting down the steps.

The only lazy part in this trek is that after having a gaala time in the falls, one has to climbup again the whole 1000 steps to reach the parking area, which may be quite tiresome for some people. But i assure you that it is a lifetime trekking experience and it is throughly enjoyable. 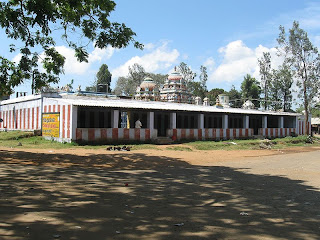 This temple dedicated to Lord Shiva is exactly in the spot where we start our trek down to Aakasha Ganga waterfalls. The temple belongs to the 2nd century and was said to be built by Valvil Oori king. Like all our other temples here too we can find some stone inscriptions. This is a very cute, small temple typical to any hill station. This is one of the 275 Padal Petra Stalams, glorified by the hymns of Nayanmars. 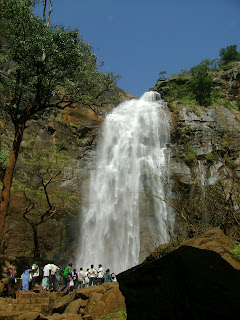 This is comparatively a small waterfalls and the height is quite lesser. There is a small trail (concrete path) few meters the tourists have to walk to reach this spot. A bath in this cascade refreshes you.

Kolli pavai temple: This temple is very small and is dedicated to godess of the kolli forest called Kolli pavai. She is said to be the protector of the Kolli hills. This temple is amidst the fields (mountain cultivation) and is in a different environment. 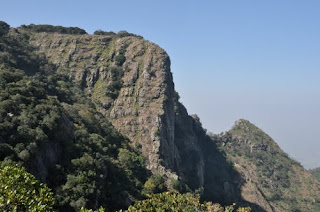 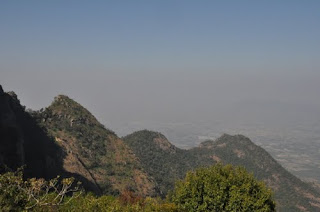 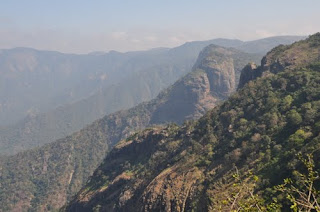 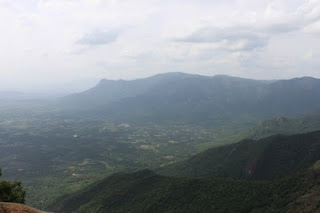 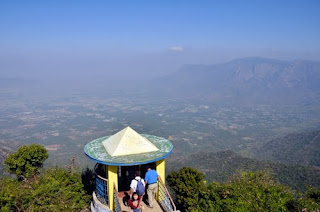 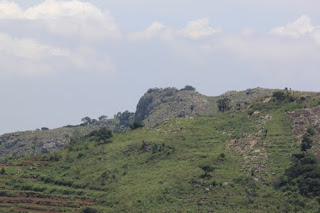 These 2 viewpoints here in Kolli hills are very picturesque and give steep breathtaking views of the nearby valleys. The viewpoints are very well approachable by road. 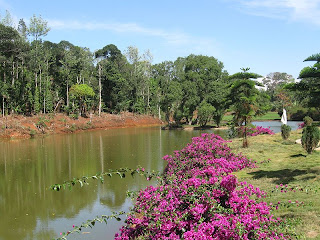 This boathouse is a vital tourist spot in Kollimalai. The lake is quite small and there is a natural island in the middle of the lake. A small park has been developed here in this island. As such there are 4-5 pedalling boats available for the tourists to have a ride in this small lake. The boathouse is on the Solakkadu-Thinnanurpatty road in Kollimalai.

Road Route:
* From Chennai take the NH-45 road and travel uptill Ulundurpet.
* From Ulundurpet take the SALEM-ULUNDURPET ROAD and travel till Attur.
* From Attur take SH-79, pass through Namagiripettai and reach Seerapalli.
* From Seerapalli take left turn and travel for approximately 7km and then take another left turn to catch SH-95. Continue straight in SH-95 for another 7-8km and you reach Kalapanayakanpatti.
* From Kalapanayakanpatti, take the left turn to catch the hair-pin bend road (kolli hills road) and proceed to reach Kollimalai.

There are quite few hotels available for the tourists to stay in Kolli hills. Having visited the place twice, i would recomend the following 2 hotels.
Family accomodation: PA lodge (PA Holiday Inn) is the best. Individual cottages are available here for staying. The resort is extremely serene and has a large Eucalyptus farm. There is also an open ground available for the tourists to play badminton, volleyball and few such games. We can also have a long walk in trail inside the resort that gives an exact forest trek feel. Tariff: Rs. 1000 onwards.
For bigger group accomodation (10-15 or more): Nallathambi resort is a better option. Here also there are landscaped gardens and ample rooms and cottages available for accomodation. Tariff: Rs. 500 onwards.

(The cottage we stayed)

Food is available in both the resorts and it is better to have food in the hotels where we stay as there are no proper restaurants available in Kollimalai as of now during the sightseeing.
In Kolli hills except for Vodafone and BSNL no other cell phone towers are available. So people using other cell phone operators kindly make sure of this point.

Popular posts from this blog

June 13, 2012
Poolampatti  ( பூலாம்பட்டி ) is the best location in Salem district  This is located on one of the banks of river Kaveri. The daily boat ride across River Cauvery in picturesque Poolampatti in Salem district throws safety to the winds.  In Salem we have a nice place Called Poolampatti which is nearly 40 km away from Salem city.  Every one in Salem please Visit it once.Boat ride Poolampatti to Nerunjipettai in erode. The main occupation is agriculture here. With this cattle also adds to the source of income.  Poolampatti is the ideal location for shooting films. Rasukutti, Pownu Pownuthan, Mutrugai, Samundi, Thamarai, Tele shooting such as Sun TV Sivasakthi etc. were taken here. Location View Larger Map
2 comments
Read more

June 11, 2012
About Salem  If you are interested to spend your holidays in a calm and cool place, you can come to Salem. The Famous Tamil Poet – Avvaiyar’s birth place is Salem. Being the central part of Tamil Nadu, it is famous for stainless steel. Tamil Nadu’s fourth largest city is Salem. Surrounded by hills, Salem is also a part of the Kongu Nadu (Coimbatore and Erode) region Salem is at the base of the renowned tourist destination of Yercaud hills, which offers breathtaking views both along the ride up the hill and from the peak. There are also remote sites of beauty such as Kiliyur Falls.The city is surrounded by a natural amphitheatre of hills formed by the Nagaramalai to the north, the Jeragamalai to the south, the Kanjanamalai to the west, and Godumalai to the east During the month of July, Mariamman festival is celebrated in Salem for 15 days. Here lot of Mariamman (Hindu Goddess) temples are attracts large number of tourists. This is the best period to visit here. The amusement Park
22 comments
Read more

June 12, 2012
Pachimalai Hills are a part of the Eastern Ghats in the southern state of India,Tamil Nadu. The hills are spread over the districts of Tiruchirapalli, Salem and Perambalur. Pachai in Tamil means green and the Pachimalai hills is greener than the some of the hills located nearby. The rivers flowing through the hills are Kallar and Sweata Nadi. The Veeraramar Dam is located in the hills across the Kallar River. The waterfalls in the hills include Mangalam Aruvi, Koraiyar Falls and Mayil Uthu Falls. The most cultivated fruit in the hills is jackfruit.  There are many native tribes inhabiting the hills. The hills are spread over the towns of Thuraiyur, Esanai, Perambalur, Gangavalli, Thammampatti, Arumbavur,Malayalappatti, Thedavur and Uppiliapuram.  Pachai means Green and malai means mountain.Pachamalai which spread with a few ranges is a haven of the tribal of this region with unique culture and way of life.It's altitude is 500 meters to 1000 meters above msl.This mountain r
Post a Comment
Read more